I’m the type of person who needs things to be logical. I want facts, rationale and sensibility. I’m not great with emotions; I don’t find comfort in religion, and I’m often dismissive of things that come across as too spiritual or emotion-driven.

I’ve always cherished my logical brain and scoffed at people who allowed themselves to be spirited away by religion, astrology, healing energies and things like that.

And yet, here I am, gearing up to talk about chakras.

Because it has been pointed out to me on many occasions that I’m bad about throwing the proverbial baby out with the bathwater.

I love yoga, and I’ve always been drawn to studying it, practicing it and teaching it. However, I don’t think that I can teach it or fully appreciate it without exploring this thing that a majority of people believe to be an integral part of the yoga practice.

My fiance recently asked me how I knew that there was no useful knowledge to be gained from understanding chakras. I couldn’t give him an honest, definitive answer because the truth is that I had dismissed the idea of them wholeheartedly.

So, in light of my ignorance, I’m going to share a bit about what I’ve learned and revisit my opinion about the utility (or possible lack thereof) of incorporating the idea of chakras into an otherwise rational yoga practice.

The first thing that every post will tell you is that the Sanskrit word chakra translates roughly to “wheel” or “disc.”

Unless you’re a serious scholar of Sanskrit and yoga tradition (like this man, who I learned some cool stuff from), you’re probably only familiar with the extremely popular 7-chakra system. I’m not going to dive into a long-winded explanation, but in my research I found that there are a LOT of different chakra systems. Some have five, others have a dozen or more, and some Eastern philosophies say that there are as many as 114 chakras in the body.

My takeaway from people who are the most knowledgeable about the subject is that you should basically just focus on whatever works best for you in regards to chakra energy. So, for the sake of simplicity, I’m just going to briefly cover the seven that most people know.

The Sanskrit word for the root chakra is muladhara (say: MOO-lahd-hahra).

It’s typically represented as a four-petaled lotus, and it is said to reside in the base of the spine.

As the root, it is usually associated with feeling grounded, stable and firmly planted in your life. It’s also associated with our deep-seated survival instincts and the earth element.

2. The Pelvic or Sacral Chakra

The Sanskrit word for this chakra is svadishthana (say: svahd-HISH-tahna), which roughly translates to “established self.”

This is usually represented as a white lotus with six petals and a crescent moon inside of it. It sits in the pelvis or genitals, and it’s typically associated with the water element.

This chakra’s energy is not necessarily sexual in nature. Rather, it’s thought to represent movement, feeling and connection as well as joy, creativity and enthusiasm.

The Sanskrit word for the navel chakra is manipura (say: MAN-ee-poora).

The manipura is a 10-petaled lotus, often with a red, downward-pointing triangle inside of a yellow circle.

The navel chakra is associated with wealth, power, growth and personal identity, and its elemental association is fire. Most practitioners say that this chakra also influences the metabolism and digestion.

The Sanskrit word for the heart chakra is anahata (say: ah-NA-ha-duh).

The heart chakra is sometimes portrayed as a 12-petaled lotus with dark red petals and a hexagonal center filled with black smoke. In other representations, it looks like a circular flower with 12 green petals and pink in the center. Interestingly enough, it can also be portrayed as a lotus with two intersecting triangles in the center that signify the union of the masculine and feminine.

In all cases, it’s thought to be where the “true self” is found, as well as the source of the “inner sound.” The inner sound is unique to each person and can only be sensed during a long, deeply meditative practice.

The Sanskrit word for the throat chakra is vishunddha (say: vi-SHU-ndhah), which translates to “purification” or “clarification.”

The chakra is most often represented as 16 turquoise petals surrounding a circular white center with a silver crescent moon inside.

It is thought to govern communication and mental clarity, and certain practitioners say that it is an important part of lucid dreaming.

The Sanskrit word for the brow chakra is ajna (say: AHN-ya), or “command.”

The chakra is said to technically be located between and slightly above the brows, and it is what most people understand to be the third eye. It is depicted as a lotus with two white petals and circular center with a downward-pointing triangle inside.

Ajna is typically associated with the brain as well as wisdom, perspicacity and intuition. It is also said to represent the balance of the higher and lower selves.

The Sanskrit word for the crown chakra is sahasrara (say: sa-HAHS-rahrah).

The word translates to “thousand-petaled lotus,” and it’s depicted as…yup. A lotus with 1,000 petals. Sometimes the petals are white, sometimes they’re multicolored and other times they are golden. The center is circular and contains a round, golden moon encircling a golden triangle that can point either upward or downward.

This is the chakra of pure consciousness, and it’s generally believed to be the source of the other six chakras. It is the most subtle of the chakras, and the most difficult to truly master. 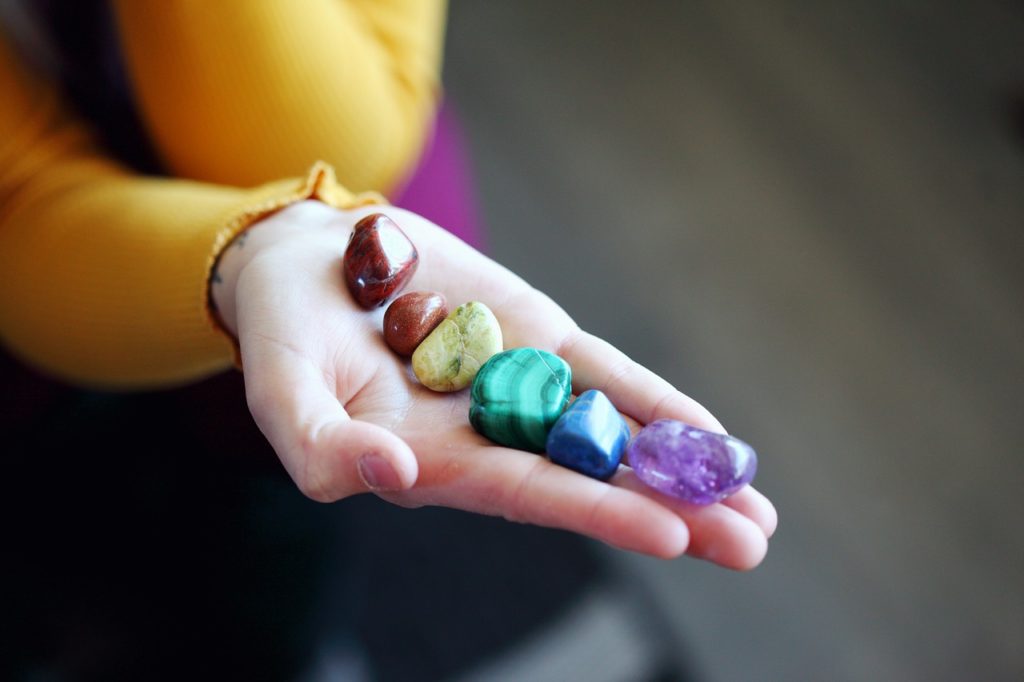 That’s a lot of information to take in, even if you just skim it. To keep your eyes from glazing over, I’m going to wrap this post up and wait until next week to talk about whether or not this information is useful for a better yoga practice.

Until then, if you have questions, comments or just want to chat about something a little different from our regular beauty talk, drop a line in the comments!